To share your memory on the wall of Alberta Pevler, sign in using one of the following options:

Provide comfort for the family of Alberta Pevler with a meaningful gesture of sympathy.

Print
Alberta May McCalla Pevler, 85 passed away Wednesday March 6, 2019, peacefully at her home in Grover, Co.

Alberta was born June 28, 1933 in Haxtun, Co. to Albert and Edna McCalla. She was the oldest of seven children. She Married Ross... Read More
Alberta May McCalla Pevler, 85 passed away Wednesday March 6, 2019, peacefully at her home in Grover, Co.

Alberta was born June 28, 1933 in Haxtun, Co. to Albert and Edna McCalla. She was the oldest of seven children. She Married Ross Pevler on September 6, 1949 in Sterling, Co.

Alberta enjoyed spending time outside with her animals on the ranch. Her favorite was teaching her miniature ponies to drive in parades and check on her cows out in the pasture. She enjoyed watching the Broncos and Horseracing on Tv.

Alberta was preceded in death by her father Albert, mother Edna, husband Ross and daughter Phyllis. She is survived by her two sons Larry (Irene) and Garry (Tammy). As well as five grandchildren and four great-grandchildren. She lived a full life, is loved by many and will be missed deeply.
Read Less

To plant a memorial tree in honor of Alberta May Pevler, please visit our Heartfelt Sympathies Store.

Receive notifications about information and event scheduling for Alberta

There are no events scheduled. You can still show your support by sending flowers directly to the family, or planting a memorial tree in memory of Alberta May Pevler.
Plant a Tree

We encourage you to share your most beloved memories of Alberta here, so that the family and other loved ones can always see it. You can upload cherished photographs, or share your favorite stories, and can even comment on those shared by others.

Plant a Tree in Memory of Alberta
Plant a tree 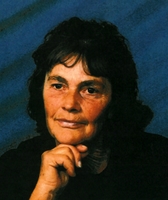