To share your memory on the wall of Frank Gilkey, sign in using one of the following options:

Frank attended Denver University and stopped just short of graduating. He worked for his father, painting cars before entering the Navy in 1950. He was a submariner and had duty on the USS Tilefish and the USS Diodon.

While in San Diego, he met and married Bettie Hiller and they had a son, Michael Gilkey. They divorced and Frank then returned to Colorado in the late 1950s.

Frank had a love for cars and he owned and rebuilt many MG’s in his early years. He also had some beautiful cars ranging from 1950’s era Fords, to the first Corvette Stingray, and many new Cadillacs. All of his automobiles were immaculately maintained.

He also had a small dog at all times during the last several decades of his life. He loved the dogs and spoiled them as much as could be. He said, “I would sell my car to help the dog.”
His latest dog “Oreo” was found at the breed’s association and will be placed accordingly. He made detailed plans for the dog’s care if something were to happen to him.

Frank had several jobs in Denver ranging from “meter reader” to Cadillac salesman. He met Nancy Roberts in Denver and they married in 1967. They spent many hours motorcycling around the country with friends. Nancy’s job with GM took them to Michigan for several years.

Together they moved back to Colorado and purchased the Crestwood Manor Motel in Akron, Colorado.
They ran and managed the motel for many years until they divorced.

Frank moved to Greeley to be nearer to his medical doctors. He was known for his unique, handmade, printed shirts. He enjoyed visiting with friends in several of Greeley’s coffee shops. Many people enjoyed his friendly and positive personality.

Frank will be missed by many, including his friend Susan, his in-laws from his last marriage, Bob, Jan, and Dr. Terri. He was appreciative of many doctors, but especially grateful for Dr. Lynn Dilley and Dr. Kelly Sanderford who helped him immensely over the last decades of his life.

Survivors include his son Michael (California) and nephews Chuck (Florida) and Rick (Greeley).

Frank wishes were to have no services. His cremains will be interred in the wall at Ft. Logan Cemetery.
Read Less

Receive notifications about information and event scheduling for Frank

There are no events scheduled. You can still show your support by sending flowers directly to the family, or planting a memorial tree in memory of Frank Allan Gilkey.
Plant a Tree

We encourage you to share your most beloved memories of Frank here, so that the family and other loved ones can always see it. You can upload cherished photographs, or share your favorite stories, and can even comment on those shared by others.

Posted Nov 22, 2019 at 05:22pm
Frank was my Uncle for 31 of my 50 years and I’ll always just think of him as my Uncle Frank. When I was young he was one of my heroes. I loved his sense of style and his humor. He and my Aunt Nancy would visit from Michigan and always have a new Eldorado to show off. He wore a lot of designer jogging suits but chose to call them “ sitting suits “. Frank and Nancy would give me sitting suits for Christmas so I could be like him. On New Years eve’s, after he quit drinking, he would stay at our house and watch my sister Terri and me and we would make popcorn balls. He was always the fun Uncle who would treat us to McDonalds. We’d thank him and he would reply “just plum tickled I was able.” We had a lot of good times with our Uncle Frank and Aunt Nancy when they would visit.
Unfortunately, he and Nancy divorced. It left quite a void at Holliday dinners. My folks would often go have lunch with him after the divorce. I regret now not going to a few of those lunches. I guess I thought he’d be around forever. Your heroes don’t really ever die because they live in your heart forever. Thank you Uncle Frank. God Speed.
Comment Share
Share via: 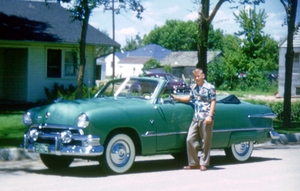