To share your memory on the wall of Eldon Meyer, sign in using one of the following options:

Eldon always had fun showing his character to everyone. He enjoyed carving wood crafts and watching any kind of western movies. He was not afraid of speaking his mind. He was incredibly hard working. He had unconditional love for his beloved wife and family. He is remembered by most as the most patient man.

He was preceded in death by his parents; four sisters and three brothers.

A Celebration of Life will be held at 1 P.M. on Monday, December 9th at Northern Colorado Crematory.
Read Less

To send flowers to the family or plant a tree in memory of Eldon Daniel Meyer, please visit our Heartfelt Sympathies Store.

Receive notifications about information and event scheduling for Eldon

We encourage you to share your most beloved memories of Eldon here, so that the family and other loved ones can always see it. You can upload cherished photographs, or share your favorite stories, and can even comment on those shared by others. 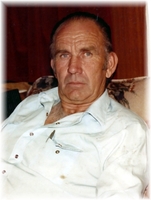