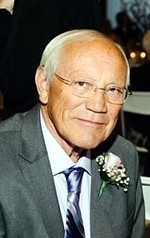 Donald was born in Denver to Emil and Ruth (Dahlgren) Mueller on April 12, 1945. As he grew older, he attended Denver Public Schools.

On November 26, 1965, out of a multitude of men, Don was one of three chosen to be a Marine. He then headed to boot camp in Camp Pendleton, CA, where he quickly proved his courage and strength.

After graduating boot camp, Don came home to marry the love of his life, Bonnie Jean Schwartz (Mueller). The two committed their lives to each other before family and the Lord on April 23, 1966 at St. John’s Lutheran Church in Greeley, CO.

Only a few short months later, Don served our country while deployed in Vietnam as a Teletype Operator. When complications worsened with his feet, Don was then hospitalized in Yakuza, Japan. On August 11, 1966, he was honorably discharged and was able to return home to his family.

Once home, safe and sound, Don and Bonnie wished to start a family, and finally in 1973, their daughter Michelle was born, or as he called her, “Smelly”.

Throughout the years of being home, Don helped farm with his father-in-law, Ed Schwartz, in the Eaton area. It was at this time in his life that he began painting tractors. Little did he know that this was the beginning of his auto body and painting career.

His goals of owning his own auto body shop finally came into fruition, and in the early 1980s, Don’s Body & Paint (later to be known as Eaton Paint & Body) was established, where Don specialized in painting semi-trucks and tractors.

Not only did Don love his work, but more than anything, he loved the Lord and his little church in Ault, First Lutheran Church. He was a member of the church choir for many years and served on the board for several terms. Whether he was front and center, or back in the pews, Don never left his church, for it was more than just a building; it was the loving people inside that he considered his family.

As time passed, Don’s family grew. His daughter married and he was soon blessed to become a grandfather to two girls, Myriah and Mishayla, or as he called them, “Sweet Pea” and “Rosie Bud”. Then, in 2017, he became a great-grandfather to Rylynn, or as he called her, “Little Button”. Don loved his family so much, but the bond between him and his granddaughters was indescribable. He was the best Grandpa.

He was proceeded in death by his parents.