To share your memory on the wall of Frank Maestas, sign in using one of the following options:

Print
Frank R. Maestas, a longtime resident of Pierce, CO, died unexpectedly on Aug. 8, 2020 at the age of 86 after a short battle with COVID 19.

Frank is survived by his wife, Florence (Archibeque) Maestas, sons Frank Maestas, Mike and Barb M... Read More
Frank R. Maestas, a longtime resident of Pierce, CO, died unexpectedly on Aug. 8, 2020 at the age of 86 after a short battle with COVID 19.

Frank was born in Talpa, NM, on July 30, 1934 to Florentino and Delfina (Romo). On December 25, 1954 he married Florence Archibeque during a ceremony in Ault, Colorado.

Frank was retired, but spent most of his career in the construction field. He was a devoted husband, father and grandfather and was an avid fisherman. He enjoyed fishing the Poudre River outside Fort Collins, Colorado and Hohnholz Lakes near Jelm, Wyoming. Frank was also a skilled craftsman and gardener, spending much of his retirement growing his beloved Mirasol chili and tending to his pickles and pumpkins for his grandchildren.

Frank was preceded in death by his grandsons Michael and Carlos Maestas.

At this time, there will be no funeral service. Frank was cremated on August 12, and entombment at the Ault Cemetery will be scheduled at a later date.

Frank was a loving husband, father and friend to many. His peaceful demeanor, creativity, and gardening talents will be missed by those who had the pleasure to spend time with this gentle soul.
Read Less

Receive notifications about information and event scheduling for Frank

There are no events scheduled. You can still show your support by sending flowers directly to the family, or planting a memorial tree in memory of Frank Robert Maestas.
Plant a Tree

We encourage you to share your most beloved memories of Frank here, so that the family and other loved ones can always see it. You can upload cherished photographs, or share your favorite stories, and can even comment on those shared by others.

Posted Aug 17, 2020 at 11:01am
So Very Sorry For Your Loss.In Your Time Of Sorrow May It Ease Your Pain That Others Are Thinking Of You.🙏➕
LOVE,HENRY & MARGARET GARCIA
Comment Share
Share via: 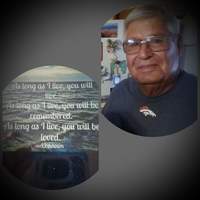