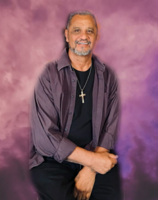 Natividad Ramon Cervantes, 68 entered into eternal rest surrounded by loved ones in his home on September 5, 2021. Natividad "Ned” was born in Greeley Colorado to Lupe Cervantes and Nellie Pisana on May, 8 1953. Ned was a loving generous man and never asked for anything from anyone. He was a selfless kind hearted man who was very optimistic and always put God First. Ned was well known in his town and his humor could lighten up any room. He graduated from Central High school in June 1971. He was also involved in the boys and girls club and helped coach softball/baseball. He later enlisted in the Navy and served from Nov, 1971- Nov, 1977. While there he studied and worked in engineering and served in the Vietnam War. Ned traveled all around the world and he lived in Hawaii for some time. He gave his life to God and devoted his life to serve him at the age of 33. He then married Andrea Herrera whom he met at church, they went on to raise a beautiful family together. Ned worked in Maintenance and auto body most of his life. He loved cars and working on cars was his passion, he enjoyed being able to buy, flip and sell cars. He owned many collectable muscle cars and had a love and passion for them. He also had many motorcycles and would take his daughters and grandchildren on bike rides. He enjoyed the outdoors. Later in life he became a youth pastor with his wife at Greeley Assembly of God. They mentored many many youth and most of them called him "dad.” He was a wonderful, talented, funny, hardworking man as well as easy going. Ned loved life and most of all his daughters and family. He always gave to others and made helping others his life mission. He is survived and remembered by Andrea Herrera his former wife and best friend, Nina Serna, his children Crystal (Isacc) lira, Raquel (Freddie) Romero, Erica Cervantes and Cheri Cervantes. Grandchildren, Mikala, Izak, Zaniyah and Maliyah. Elena, Freddie, Jovani, Eliana, Evalyn, Joaquin and Sergio. His brothers and sisters and a multitude of family members. He is preceded in death by Lupe Cervantes his father, Nellie Pisana his mother and Manuel Cervantes his brother. Celebration of life will be at Trinity Spanish Assembly of God, 601 21st avenue Greeley Co at 12pm, Friday September 17th,21.