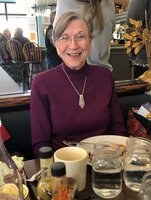 Evva Lou Johnson was born to Virgil Johnson and Marie Craig on February 11, 1933, in Joplin, Missouri. She spent most of her early years in Falls City, Nebraska, entering the U.S. Navy to serve at St. Albans Hospital in New York two years out of high school. She enjoyed her time in The Navy, often telling tales of sneaking out of the barracks to enjoy evenings in New York City. ‘Torchy,’ as she was known in her high school, broke her share of hearts until she met her true love, Clem Schuette in Omaha, Nebraska. Clem’s family owned a boarding house where Evva Lou roomed with his sister, Lorraine. Although they lived in the same house, Clem didn’t meet Evva Lou for three months. When they cast eyes upon each other for the first time, Clem resolved that Evva Lou’s days as a heartbreaker were behind her, and they were married 14 months later. Life took the couple to Greeley, Colorado in 1977 where they owned Superior Shoe Service. Evva Lou took care of the books, and her vibrant personality was on display greeting customers. Clem and Evva Lou raised 4 children: Karen Garrett (Steve), Ann Apple (Rich Johnston), Paul, and David (Michelle). They enjoyed 7 grandchildren: Kacy and Amanda Minot (Vila Thach), Christopher (Kate Crawford) and Kaitlynn Apple, Sydney Klein (Ethan), Jordyn and Taryn Schuette. Sadly, COVID forfeited any chance of Evva Lou meeting her first great grandchild, Rae Linh Thach, who lives in South Korea. Life after raising her children included volunteer work, which she dedicated herself to for 20 years, including shopping for shut-ins and a long stint at North Colorado Medical Center. There she was often the first person to greet patients and visitors, her natural warmth and humor putting them at ease. Evva Lou Johnson Schuette passed away on December 10, 2021, from Alzheimer’s disease; the cruel thief dashing her memories bit by bit after her son Paul passed away in 2015. Alzheimer’s starts small; not remembering a name, directions to a restaurant, etc., and then it gathers strength. Perhaps you are trying to follow a recipe and you find the instructions are scrambled in your head; or you need to pick up your husband from the airport and can’t remember how to get there. Ultimately, you might not remember how to get around in the home you have lived in for 20 years; and your daughter is a familiar face, but you can’t remember why… Clem tenderly cared for Evva Lou at home with steadfast devotion until days before she passed. Their 61-year marriage was one filled with a deep and inspiring love whose flame never dimmed. Alzheimer’s stole so much from her, but it didn’t touch Evva Lou’s sassy and effervescent personality. She effortlessly made all those around her laugh right up until the last few days of her life. When she died, we all lost a vivacious, friendly, entertaining spirit. Now, Evva Lou is reunited with the memories of a life fully lived; and her son Paul and the mother she never knew; plus, all the friends and family who went before her. There’s a dance party in the spirit world tonight, and guess who’s greeting the revelers at the door? An Honor Guard ceremony will be held for Evva Lou on December 29th at 10:15 at Fort Logan National Cemetery. Guests are asked to be at staging area C at 10:00. A Celebration of Life Open House will take place in Greeley on December 29th from 2:00 PM - 4:00 PM. Greeley Area Realtor Association Office 1620 25th Avenue Suite B Greeley, Colorado 80634 In lieu of flowers the family requests donations to be made to: Union Colony Marines. P.O. Box 821 Greeley, Colorado 80632