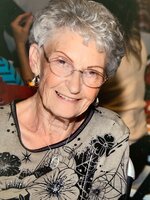 Dorothy Ellen Lee was born on September 3, 1927 in Elsie, Nebraska to Alice and Oscar Lee. Her childhood was one of many depression children, constantly on the move with her family. She finished her schooling in Ogallala, Nebraska. There she met and married Vernon Zimmerman in January, 1947. They were blessed with six children and enjoyed a life together until Vernon’s passing in 1978. In 1984 Dorothy married Richard Ward, they also had a wonderful life together until his passing in 1984. Dorothy had many interests, she loved to travel, hunt arrowheads, garage sales and visiting with family and friends. Her last years were spent dancing! She and her senior friends would attend senior dances in the Northern Colorado area at least four nights a week. She was very active and fun! She was a true child of the depression, everything had a use and nothing should be thrown away. She never met a margarine tub that she didn't like! Dorothy is survived by her sons, Ron Zimmerman of Fruita, Co, Mark Zimmerman, Las Vegas, NV, Daughters, Linda Sprague, Eaton, Co, Marlene Elder, Eaton, Co. Brother, Dale Lee, Gordon, Ne. 10 grandchildren, 15 Great Grandchildren, 6 Great Great Grandchildren, her predeceased husband, Vernon Zimmerman, husband Richard Ward son Allen Zimmerman, daughter Carol Ann Zimmerman. Son in laws, Gene Elder and Phillip Sprague Sisters, Ann Carlin, Donna Dorn Kay Dawson Brothers Bob and John Lee.