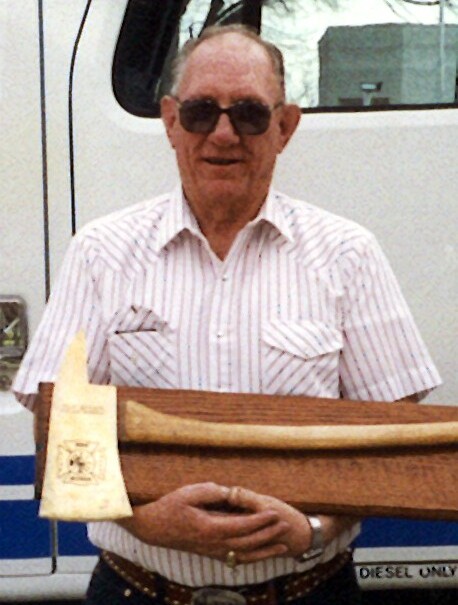 Dale was born in Purcell, Colorado to Armon and Vara (Tribulet) Barnaby on July 18, 1926. His family moved to Nunn, Colorado when Dale was thirteen years old and he lived his remaining 82 years committed to family, friends, and the community of Nunn.

His loyality was shown through his 53 years on the Nunn Volunteer Fire Department, over 25 years as Postmaster of Nunn, trustee of the Nunn Presbytarian Church, volunteer and board member of the Northern Drylanders Museum in Nunn, Volunteer and master of ceremonies for the Nunn Fall Festival.

The only thing more important to Dale was his family, including 6 brothers and 3 sisters.

Dale is survived by his daughter, Shala Bickling and Son-in-law Jim Bickling; his grandchildren, Ricci Sullivan and Jared Bickling, multiple other grandchildren; as well as his sister, Vara (Toots) Miller.

He was preceeded in death by his wife; his song and parents; brothers, Ed, Wesley, Galen, Paul, Cecil, and little Albert; and his sisters, Virgie and Bert.

A celebration of life will be at 10:30am on Saturday, May 14th at the Highland Community Church in Nunn, Colorado.

To send flowers to the family or plant a tree in memory of Dale Barnaby, please visit Tribute Store