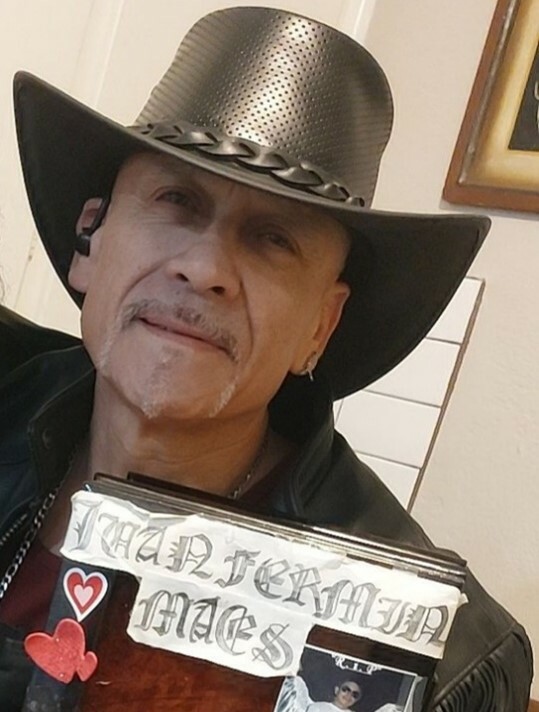 It is with great sadness that we announce the passing of our Daddy Juan Fermin Maes Jr. “JR”

Born in 1966 in Las Vegas NM he was surrounded by talented musicians within the family. He grew to love the art of music so much that he became a great musician himself. Playing with bands such as Viento, Bravo and many more.

While living in Colorado he perused his career in music and mechanics and was known as a jack of all trades. Working in such places as The City of Greely and his most recent position on the Covid Health and Hygiene crew at JBS foods which he was very proud to be a part of.

He was a loving son, brother, uncle, father, grandfather and was a loyal friend to all he knew.

He is preceded in death by his only son Fermin Maes 3rd who was survived by his son Isiah Maes, his brother Ron Baca who is survived by his wife Julie and thier children Vularia, Lazarro, Arianna and Justin and mother Arabella Lujan.

Brother Jude Maes and his children Iisha Saiz and Isaiah Maes and their children.

Our Daddy tugged at the heart strings of many people and has left us far too soon. But we will cherish the memories we have imbedded in our hearts and minds with his wild personality, funny jokes, infectious laugh, kind eyes and beautiful smile.

Services are scheduled for 9:00 am on August 26, 2022, at St. Peter’s Catholic Church in Greely C.O with reception to follow.

To send flowers to the family or plant a tree in memory of Juan Maes Jr., please visit Tribute Store