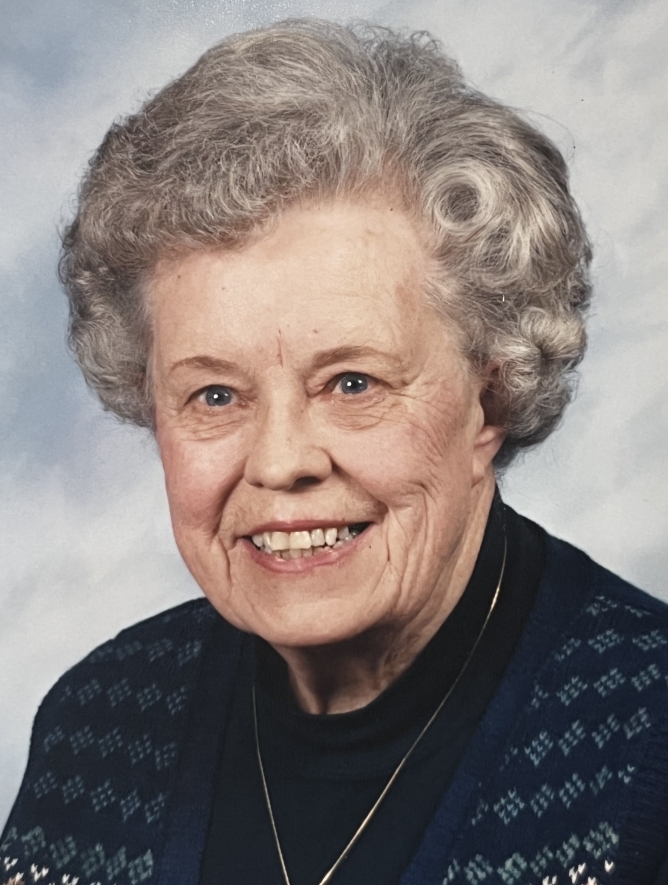 Amanda Esther Marie (Nelson) Pfenning passed away on August 11, 2022, at the age of 99 and a half at her home in Galeton.  She was born in Loveland, Colorado on March 15, 1923, and grew up in the country near Loveland. She was raised in the Lutheran Church and became a Christian at a young age. Esther spoke Swedish until she started grade school.  She graduated from Johnstown High School in 1940 at the age of 17.  She attended Bethany College in Kansas for a year and a half.  Since there was a teacher shortage at the start of WWII, she then attended college in Greeley to obtain her teaching license and began teaching in a little two room country schoolhouse. In 1970 at the age of 48, she returned to college and obtained her BA from UNC in elementary education with a minor in art education.

Esther married Robert D. Pfenning on December 28, 1945, and they started out farming near Loveland where Esther also taught school.  They later moved to Greeley and bought a boarding house where they became house parents to college girls from around the world.  Esther also worked as an activity director for a nursing home in Greeley.  In 1971, Esther and Bob bought a farm in Galeton and raised corn, sugar beets and cattle.

Esther was the mother of 3 children raised in the Christian faith.  She was a great cook, and an avid reader, reading thousands of novels from the Eaton and Greeley Libraries.  Her hobbies also included painting, drawing, needlepoint, crocheting, knitting, sewing, and pottery.  She played the piano, accordion, and clarinet as well.

The family would like to thank the hospice nurses, aides and caregivers during Esther’s time of need.

Esther is preceded in death by her parents, Gustaf Nelson and Minnie (Sundquist) Nelson, her husband, Robert, and her son, Terry.  She is survived by her sister Genevieve Maul of Ft. Collins, her twins, Bob Pfenning (Carmie) of Galeton and Kathy Moore (Mike) of Clemson South Carolina, four grandchildren, Nick, Lindsay, Matthew, and Andrew, and eight great grandchildren.

Arrangements made by Northern Colorado Crematory.

A private family graveside service will be held at a later date.

Memorials may be made to the High Plains Library District.

To send flowers to the family or plant a tree in memory of Esther Pfenning, please visit Tribute Store