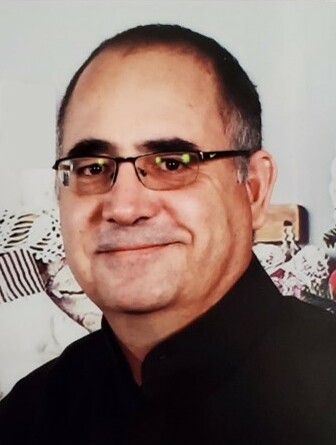 On August 18, 2022 in Greeley, Colorado, Manuel “Paul” Sisneros passed away at the age of 52 surrounded by his family.  He was born to Manuel and Bonnie Sisneros on June 20, 1970 in Laramie, Wyoming, and lived his entire life in Greeley.  He graduated from Greeley Central High School in 1988 and received his Associates Degree from Phoenix Institute of Technology.  He was a member of Sunnyview Church of the Nazarene where he met and married Deanna Ross in 1997.  They had one child, Manuel James.

Paul worked for Monfort of Colorado which later became JBS, beginning in the Print Shop, moving to Claims, and finally Sales.  He was a beef salesman for the Distribution Center in Denver for several years and eventually moved to corporate sales in Greeley.

Paul loved the outdoors, particularly the mountains, and was happiest when racing down a snowy slope on skis with his sister Becky or chasing a little white ball around a golf course with friends from work.  He was a bit of a packrat and enjoyed wandering through flea markets and garage sales searching for a hidden treasure.  He enjoyed cooking for his family.

He was a loving son, husband, and father.

Paul is survived by his wife Kaytrina Wheat and her children Zoe and Christopher, son Manuel James Sisneros of Greeley, daughter Bergen Marie Sisneros of Little Elm, Texas, his mother and father Manuel and Bonnie Sisneros, his sister Becky and brother-in-law John Steckel, nephews Nolan and Parker Steckel and many Aunts, Uncles and cousins.

He was preceded in death by his grandparents Manuel and Mary Ann Sisneros and Willard and Roma Tanner.

There will be a private family service at a later date.  The family requests you support the nonprofit of your choice in lieu of flowers.

To send flowers to the family or plant a tree in memory of Manuel Sisneros, please visit Tribute Store